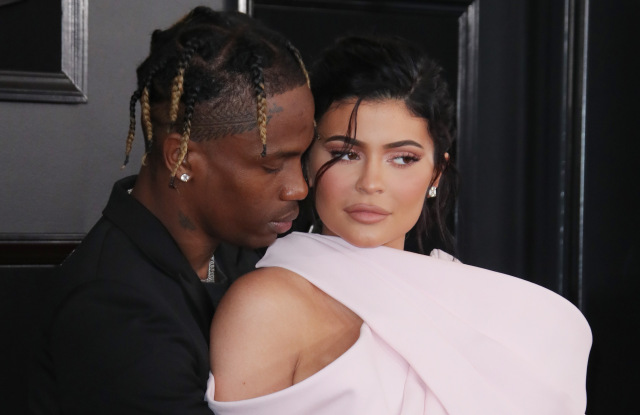 MI CASA SU CASA: Is it a wind-up or a wedding? No one knows for sure, but beauty mogul Kylie Jenner certainly has social media abuzz about her Italian escapades.

TMZ broke the news that what looked like a wedding dress was stowed away, when the beauty billionaire and Travis Scott boarded a private jet bound for “Bel Paese.” The fact that their toddler Stormi wasn’t the only member of their extended family who was along for the ride only ratcheted up the rumor mill. Kris Jenner, Corey Gamble, Scott Disick and Sofia Richie have also been photographed on various strolls in Italy.

Jenner jump-started the celebration of her 22nd birthday two days early on Thursday night with Scott over dinner, complete with a candles-ablaze birthday cake and what looked like a serragghia serenade. Italian tradition calls for a groom to serenade his bride-to-be with musicians from beneath the balcony or window on the night before her wedding. Chalk that up to coincidence. The “Sicko Mode” singer did not appear to be sharing his talents at the dinner table in Capri.

The feathery white dress that set the rumor mill in motion was carried in a white Saks Fifth Avenue garment bag. Staffers at the retailer’s Fifth Avenue flagship and its Beverly Hills outpost were buzzing about Jenner’s purchase, according to a few insiders. Whatever the occasion, Jenner supposedly wanted to keep things confidential, preferring to shop via the Fifth Avenue Club, which caters to bold-faced names and big spenders. Sources said the feathery Oscar de la Renta frock was for a special occasion, which leaves a lot to speculation or imagination.

An Oscar de la Renta representative was unable to confirm that Jenner had bought a dress. More than one Saks salesperson said they could not comment on Jenner’s dress purchase, but one offered, “I’m so sorry. I can’t speak to anyone outside of the Kardashian family.” Such caution could be rudimentary when dealing with the Momager & Co. Paging Ryan Seacrest.

Scott, meanwhile, is said to have brought along an interesting plus-one for the family getaway — his stylist. The rapper sported a right-off-the-runway printed silk shirt from Casablanca’s spring collection Thursday in Italy. Jenner took a when-in-Rome approach wearing Versace. Scott has other pieces from the Paris-designed and Casablanca-made company packed away for the getaway.

Jenner’s sister Kourtney Kardashian has also embraced the summery set-up with style wearing a leopard-printed bandeau bikini from The Upside Thursday. The day before she shared with her 80.7 million Instagram followers a shot with her daughter Penelope enjoying some gelato in Cinque Terra. Whether or not that bikini post was taken in Portofino could not be confirmed by the brand that was started by Australian model and socialite Jodhi Meares. Either way by Friday afternoon, the affordable swimsuit had nearly sold out on Shopbop.

Whether this family escape leads to a matrimonial union remains a question mark. Maybe it’s just a party or a prank. Either way the Jenner-Kardashian keep building their captive audience and laughing all the way to the “banca.”

Then and Now: A Look Back at the Kardashian-Jenner-West Fashion and Beauty Empire